This was another of those ones where it was hard to decide which photo to select to paint from, as they were all intriguing!


Our cat for today is Molly, and following is an excerpt from her owner's statement on Feb 23, the day after Molly's death.
I’m heartsick today.   Our little cat Molly did well with her initial pacemaker surgery, but the complications proved to be too difficult.  The Veterinary Clinic at the UofM was great throughout.  However, Molly developed a condition post-surgery called chylothorax, which caused fluid to gather in her chest cavity from a major lymph node.  This would build up and press on her lungs from the outside, causing Molly to gasp for breath when the pressure got too heavy.
Yesterday, Molly’s breathing rate started to climb as the day progressed.  By 5:00 she was again starting to gasp – the fluid came back that fast.  I called the UofM and they asked that we bring her in right away.  I was actually going through the grieving process earlier in the day when I noticed her breathing was again moving up the scale.
When we arrived at the UofM, we again discussed options and the ultimate decision was arrived at by weighing the odds, and we decided to do the most merciful thing for Molly.  We had to say goodbye. 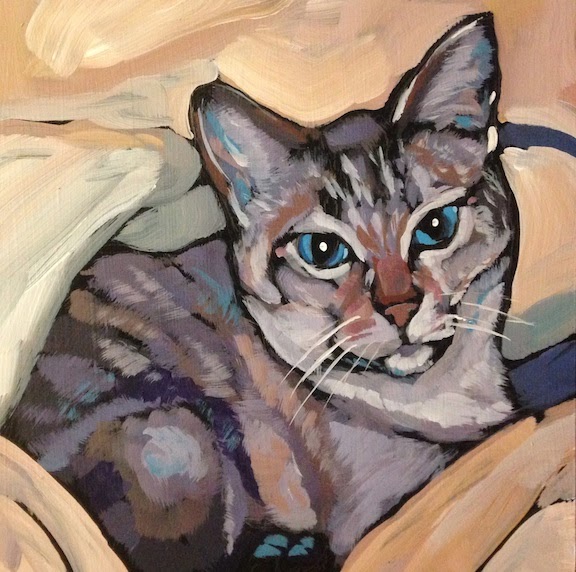 8x8 acrylic on panel, SOLD
Posted by kat corrigan at 9:39 AM