Not sure what number chicken this is... but I think it is the 3rd I've painted~

One of the ones Maxie was cuddling yesterday~  that boy!  First he finds a frog and has to play with that til it is dry and dusty and I had to rescue it from his attention and affection and release it beneath some dewey bushes (where I hope it recovered, but I am not too sure), and THEN he had to go back into the chicken coop to cuddle the chickens, who were astonishingly patient and not laying yet anyway so Aunt Dee wasn't worried at all about Max's chasing them about and scooping them up.  And really, for the most part they were calm when he was holding them~  "I just love them all so much!" he said to me as I finally managed to convince him to leave them to their scratching and pecking. 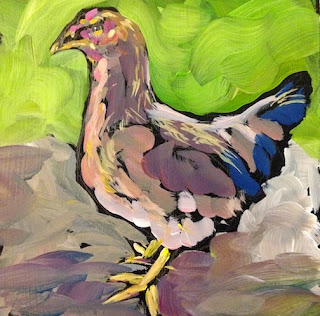