And I tried to have Max (pretty good usually with a camera at age 5, but I think he was too into his game on my phone to use the camera well) take my picture painting this, but it really didn't work...  I am painting at my sister's place in South Beach, Florida, with beautiful palm trees and skies and beaches and really friendly people!  We are having a great time!  Though it is always tricky traveling with paint, and kids too-  it's our first trip without Duane, who opted to stay home, and is now maybe rethinking that but he had a few projects to get done... I am missing his cooking and caretaking and Max is missing his ability to play continually!
SO at any rate, here is Aaron!  Painted this morning so we can head off to the Sea Aquarium! 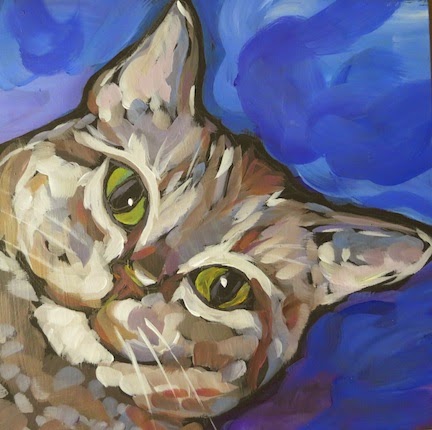 And Aaron's story is here!  His sister kitty is Soh! from March 5th!

"Aaron, known affectionately as Ah-run, wore many hats--or furs, if you will. He was the assistant captain of the prestigious dog organization the Twenty Nine Dogs. He was the endlessly regal master of his kingdom, surveying his land comfortably from his thrown on the second floor balcony. He was a loving brother to his sister Soh!, although he was not above laying down the law if she crossed him. He maintained order in his kingdom by chasing Soh! up and down the halls in the early hours of the morning, while she screeched her innocence. But most of all, he was the sweetest, most agreeable friend a girl could have."
Posted by kat corrigan at 4:29 AM